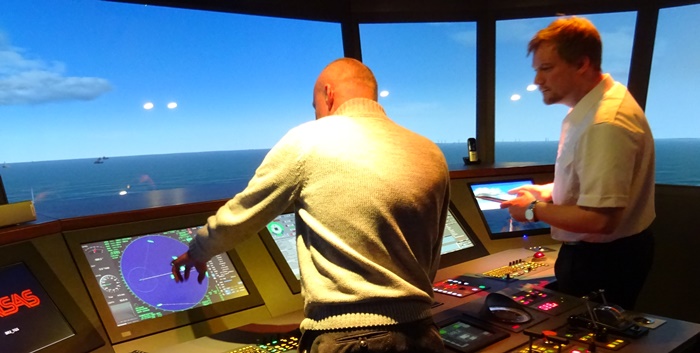 About 150 bridge officers reported a navigation realism in a simulator never experienced before. Some of the very positive comments of the Sea Traffic Management (STM) tools were “Ship-to-ship Route Exchange improves watch-keeping efficiency. It could also assist in making early decisions on course alterations to avoid getting into a Close Quarters Situation later. The speed of checking Navigation Warnings directly on the ECDIS display was excellent and if introduced would improve safety and efficiency.”

Between 13th and 16th March 2018, Warsash Maritime Academy, Southampton Solent University (WMA) welcomed 16 enthusiastic Mariners from a variety of Maritime backgrounds to take part in the first week of European Maritime Simulator Network (EMSN) Simulation runs with the STM Tools enabled. Briefing each day commenced at 07:30 (to tie in with the more leisurely start time for those in CET) and after a Bridge acquaint and a familiarisation exercise, they undertook the role of either Master or OOW on one of the two WMA Bridges in two main simulation exercises.

The scenarios have been carefully designed to test out as many different aspects of STM as possible both on the Ship’s Bridges and at the simulated Shore Centres, one of which was located at WMA simulating STC Southampton for the English Channel Scenario.

Due to the fact that nearly 30 manned vessels were participating in these exercises, using the simulator network, all test persons reported a navigation realism in a simulator experienced never before. . All the extensive technical preparations, which were necessary to offer the STM tools for validation to the participants, were successful

“The STM tools provided the first concrete and practical outlook how the digitalization process will impact shipping and navigation to increase safety and efficiency” said one of the participants at the Maritime Centre of Flensburg University of Applied Sciences. In Flensburg (one of the centres starting at 08:30) 24 experienced captains, watch officers and pilots operated three bridges during the week.
STM Services that were tested included the use of Ship to Shore Route Exchange, Route Cross-Checking, Shore Centre sending suggested changes to Routes as well as complete “Pilot Routes”, Enhanced Monitoring, Navigational Assistance, use of Chat and Ship-to-Ship Route Exchange (S2SRX).

Much valuable feedback was obtained from the participants. During the extensive discussions at “the end of the day de-brief”, they all agreed that it had been a very worthwhile experience and fully appreciated the opportunity to be part of testing future developments in the Maritime Industry. During the tests the tools like Route Exchange service or Route suggestion service were highly appreciated by the bridge crews navigating their vessels in realistic complex traffic scenarios in the English channel and Baltic sea.

Some of the comments received from the participants were as follows:

• “Good opportunity to see new developments that are taking place.”

• “It is good to see the Maritime Industry looking forward for a change; looking at technology in a positive way.”

• “The co-ordination between all the different Maritime Centres was very good.”

• “I always enjoy simulators but usually it is for assessment or training, this was a more natural environment and you could be more yourself.”

• “The speed of checking Navigation Warnings directly on the ECDIS display was excellent and if introduced would improve safety and efficiency.”

• “S2SRX could assist in making early decisions on course alterations to avoid getting into a Close Quarters Situation in the future as it helps to look further ahead.” (This was exercised quite well during the English Channel Exercise.)

• “S2SRX improves watch-keeping efficiency as it helps to prioritise vessels of interest.”

WMA also played host to a number of visitors to witness this historic event, including the Nautical Policy Lead at the UK MCA and the Nautical Institute’s member of the STM Project Policy Advisory Group (PAG). Comments received after their visits, included the following quotes:

• “I was pleased to see that Warsash was not only using its state of the art simulators but also using its world class human element focused team of professionals to observe and assess the human element issues associated with these advancements in technology.”

• “I was pleased to see the positive attitude of the active mariners engaged in this trial and the openness of the Academy instructors to take their feedback on-board.” 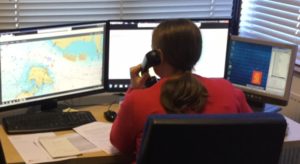 The Shore Centre simulator at Warsash

• ”I quite liked that the exercise was locally conceived, designed and run, and used a busy local area (Southampton port/roads).” (This relates to the English Channel Scenario).

• ”Good to have the VTS/Shore Centre operations also run from the local simulator unit whilst participants form far afield/European simulator centres were traversing through the area without “local knowledge” as such.”